Support & Feedback
Home > History > Islamic Posters > What does Islam say about war?
Back 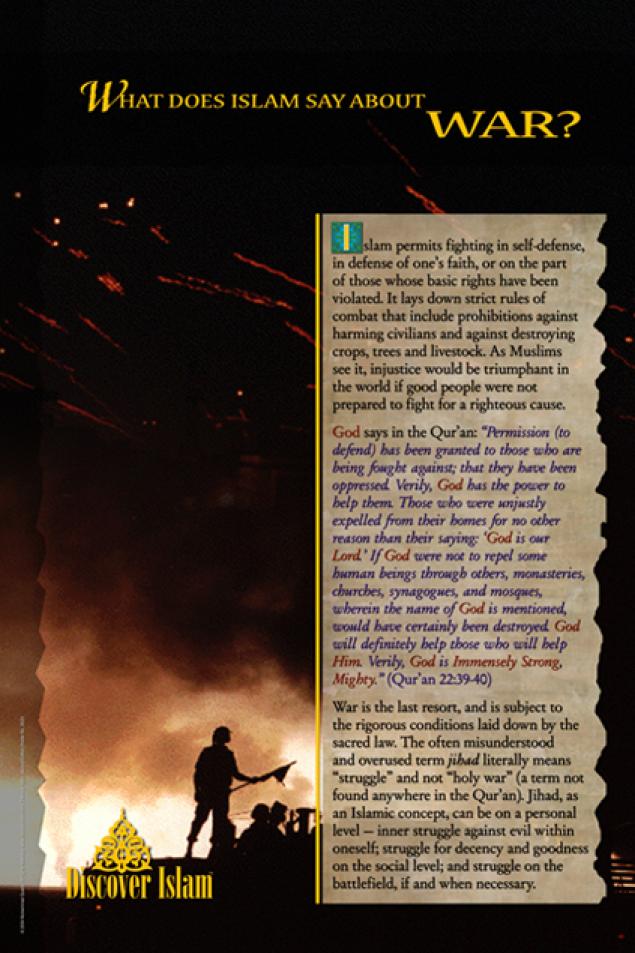 Islam permits fighting in self-defense, in defense of one's faith, or on the part of those whose basic rights have been violated. It lays down strict rules of combat that include prohibitions against harming civilians and against destroying crops, trees, and livestock. As Muslims see it, injustice would be triumphant in the world if good people were not prepared to fight for a righteous cause. God says in the Qur'an: "Permission (to defend) has been granted to those who are being fought against; that they have been oppressed. Verily, God has the power to help them. Those who were unjustly expelled from their homes for no other reason than their saying: 'God is our Lord.' If God were not to repel some human beings through others, monasteries, churches, synagogues, and mosques, wherein the name of God is mentioned, would have certainly been destroyed. God will definably help those who will help Him. Verily, God is Immensely Strong, Mighty." (Qur'an 22:39-40) War is the last resort, and is subject to the rigorous conditions laid down by the sacred law. The often misunderstood and overused term jihad literally means "struggle" and not "holy war" (a term not found anywhere in the Qur'an). Jihad, as Islamic concept, can be on a personal level - inner struggle against evil within oneself; struggle for decency and goodness on the social level; and struggle on the battlefield, if and when necessary.