Support & Feedback
Home > History > Islamic Posters > Who were some of the great Muslim scientists and thinkers?
Back 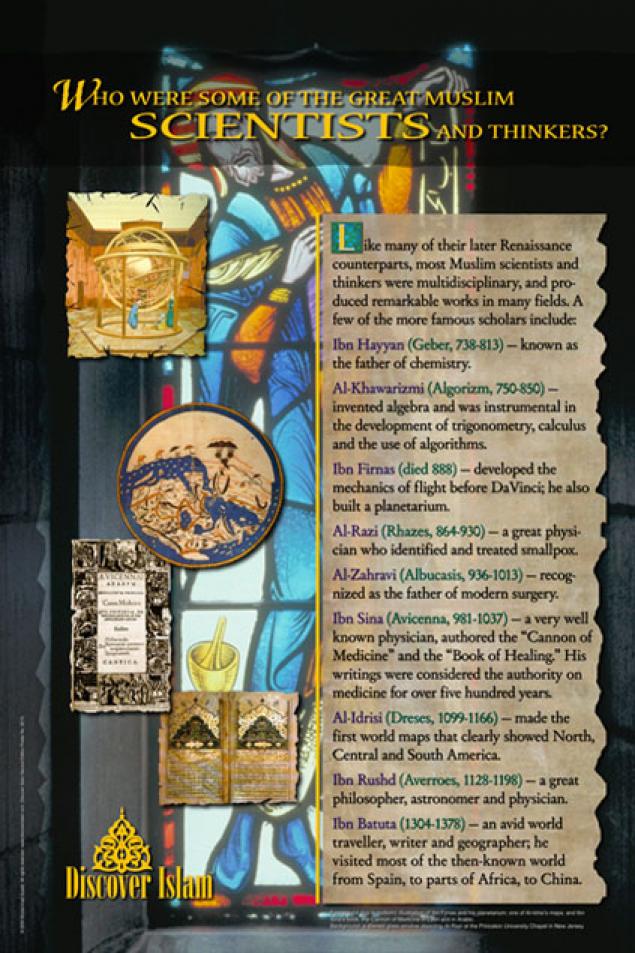 Like many of their later Renaissance counterparts, most Muslim scientists and thinkers were multidisciplinary, and produced remarkable works of in many fields. A few of the more famous scholars include: Ibn Hayyan (Geber, 738-813) - known as the father of chemistry. Al-Khawarizmi (Algorizm, 750-850) - invented algebra and was instrumental in the development of trigonometry, calculus, and the use of algorithms. Ibn Firnas (died 888) - developed the mechanics of flight before DaVinci; he also built a planetarium. Al-Razi (Rhazes, 864-930) - a great physician who identified and treated smallpox. Al-Zahravi (Albucasis, 936-1013) - recognized as the father of modern surgery. Ibn Sina (Avicenna, 981-1037) - a very well known physician, authored the "Cannon of Medicine" and the "Book of Healing." His writings were considered the authority of medicine for over five hundred years. Al-Idrisi (Dreses, 1099-1166) - made the first world maps that clearly showed North, Central, and South America. Ibn Rushd (Averroes, 1128-1198) - a great philosopher, astronomer, and physician. Ibn Batuta (1304-1378) - an avid world traveler, writer and geographer; he visited most of then-known world from Spain, to parts of Africa, to China.