Support & Feedback
Home > History > Islamic Posters > Why do Muslim women dress the way they do?
Back 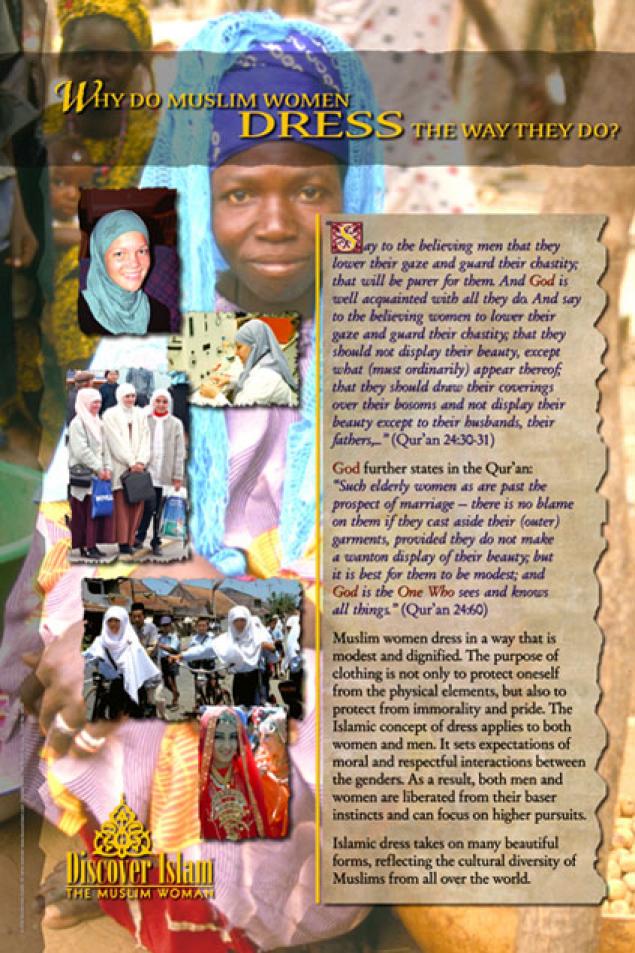 "Say to the believing men that they should lower their gaze and guard their chastity; that will be purer for them. And God is well acquainted with all they do. And say to the believing women to lower their gaze and guard their chastity; that they should not display their beauty, except what (must ordinarily) appear thereof; that they should draw their coverings over their bosoms and not display their beauty except to their husbands, their fathers,..." (Qur'an 24:30-31) God further states in the Qur'an: "Such elderly women as are past the prospect of marriage - there is no blame on them if they cast aside their (outer) garments, provided they do not make a wanton display of their beauty; but it is best for them to be modest; and God the One Who sees and knows all things." (Qur'an 24:60) Muslim women dress in a way that is modest and dignified. The purpose of clothing is not only to protect oneself from the physical elements, but also to protect from immorality and pride. The Islamic concept of dress applies to both women and men. It sets expectations of moral and respectful interactions between the genders. As a result, both men and women are liberated from their baser instincts and can focus on higher pursuits. Islamic dress takes on many beautiful forms, reflecting the cultural diversity of Muslims from all over the world.