Support & Feedback
Home > History > Islamic Posters > Does Islam want Women to be public and political?
Back 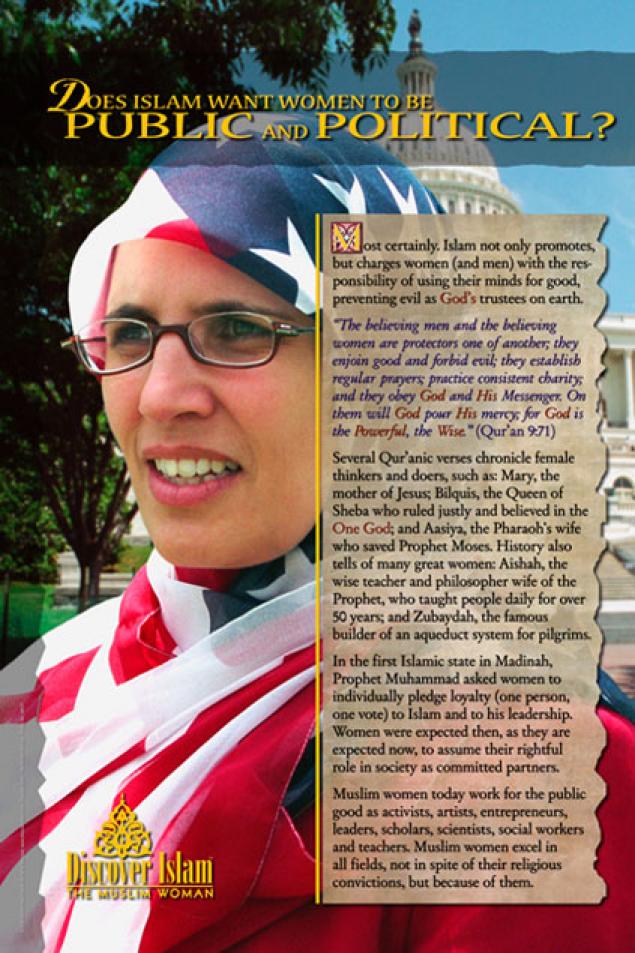 Most certainly. Islam not only promotes, but charges women (and men) with the responsibility of using their minds for good, preventing evil as God's trustees on earth. "The believing men and the believing women are protectors one of another; they enjoin good and forbid evil; they establish regular prayers; practice consistent charity; and they obey God and His Messenger. On them will God Pour His Mercy; for God is the Powerful, the Wise." (Qur'an 9:71) Several Qur'anic verses chronicle female thinkers and doers, such as: Mary, the mother of Jesus; Bilquis, the Queen of Sheba who ruled justly and believed in the One God; and Aasiya, the Pharaoh's wife who saved Prophet Moses. History also tells of many great women: Aishah , the wise teacher and philosopher wife of the Prophet, who taught people daily for over 50 years; and Zubaydah, the famous builder of an aqueduct system for pilgrims. In the first Islamic state in Madinah, Prophet Muhammad asked women to individually pledge loyalty (one person, one vote) to Islam and to his leadership. Women were expected then, as they are expected now, to assume their rightful role in society as committed partners. Muslim women today work for the public good as activists, artists, entrepreneurs, leaders, scholars, scientists, social workers and teachers. Muslim women excel in all fields, not in spite of their religious convictions, but because of them.