Support & Feedback
Home > History > Islamic Posters > How did Muhammad become a Messenger of God?
Back 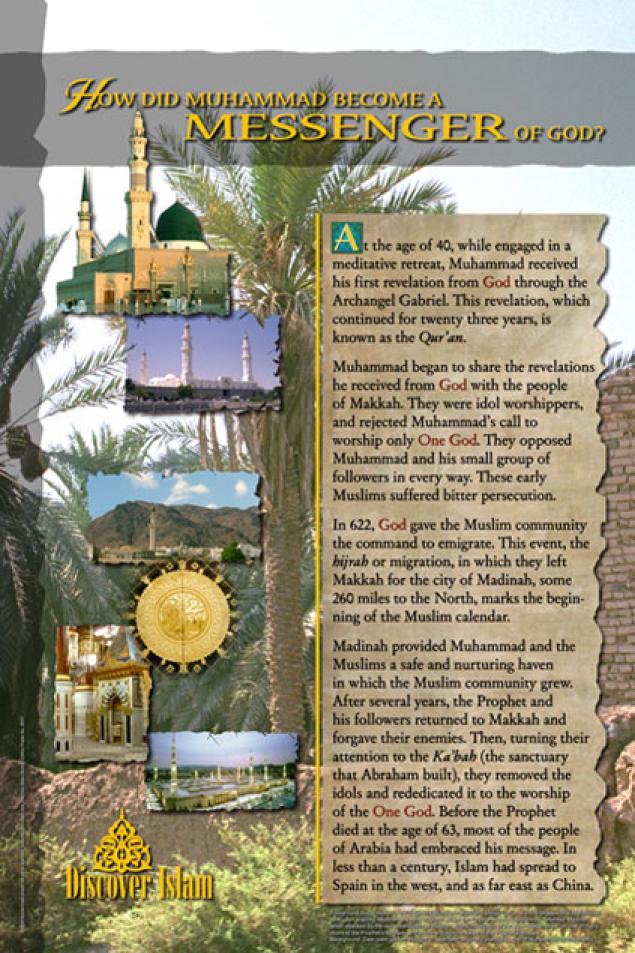 At the age of 40, while engaged in a meditative retreat, Muhammad received his first revelation from God through the Archangel Gabriel. This revelation, which continued for twenty three years, is known as the Qur'an Muhammad began to share the revelations he received from God with the people of Makkah. They were idol worshippers, and rejected Muhammad's call to worship only One God. They opposed Muhammad and his small group of followers in every way. These early Muslims suffered bitter persecution. In 622, God gave the Muslim community the command to emigrate. This event, the hijrah or migration, in which they left Makkah for the city of Madinah, some 260 miles to the North, marks the beginning of the Muslim calendar. Madinah provided Muhammad and the Muslims a safe and nurturing haven in which the Muslim community grew. After several years, the Prophet and his followers returned to Makkah and forgave their enemies. Then, turning their attention to the Ka'bah (the sanctuary that Abraham built), they removed the idols and rededicated it to the worship of the One God. Before the Prophet died at the age of 63, most of the people of Arabia had embraced his message. In less than a century, Islam had spread to Spain in the west, as far east as China.