Support & Feedback
Home > History > Islamic Posters > How did the spread of Islam affect the world? (continued)
Back 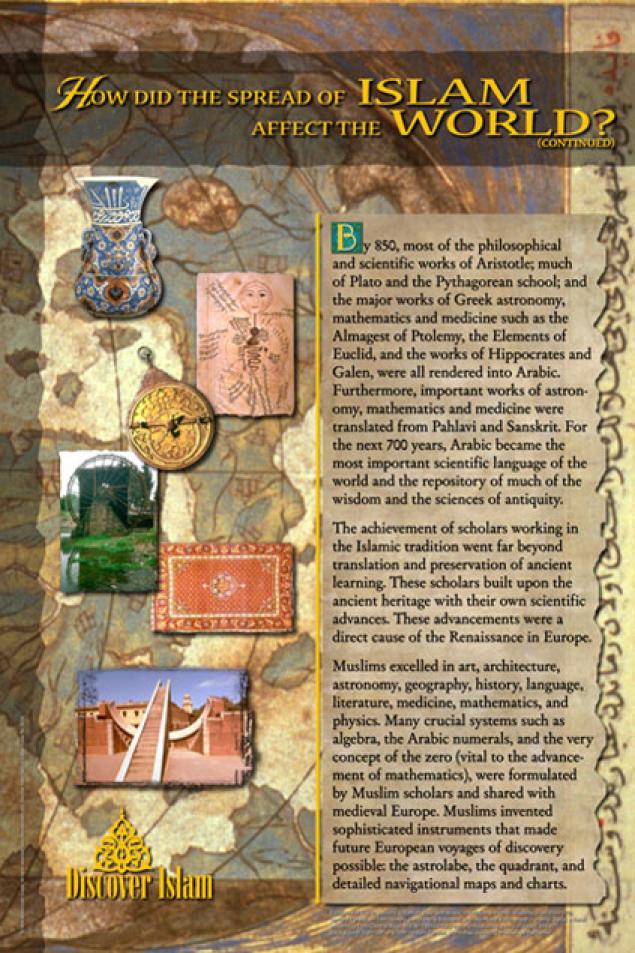 By 850, most of the philosophical and scientific works of Aristotle; much of Plato and Pythagorean school; and the major works of Greek astronomy, mathematics and medicine such as the Almagest of Ptolemy, the Elements of Euclid, and the works of Hippocrates and Galen, were all rendered into Arabic. Furthermore, important works of astronomy, mathematics and medicine were translated from Pahlavi and Sanskrit. For the next 700 years, Arabic became the most important scientific language of the world and the repository of much of the wisdom and the sciences of antiquity. The achievement of scholars working in the Islamic tradition went far beyond translation and preservation of ancient learning. These scholars built upon the ancient heritage with their own scientific advances. These advancements were a direct cause of the Renaissance in Europe. Muslims excelled in art, architecture, astronomy, geography, history, language, literature, medicine, mathematics, and physics. Many crucial systems such as algebra, the Arabic numerals, and the very concept of zero (vital to the advancement of mathematics), were formulated by Muslim scholars and shared with medieval Europe. Muslims invented sophisticated instruments that made future European voyages of discovery possible: the astrolabe, the quadrant, and detailed navigational maps and charts.