Support & Feedback
Home > History > Islamic Posters > How are Islam and America related?
Back 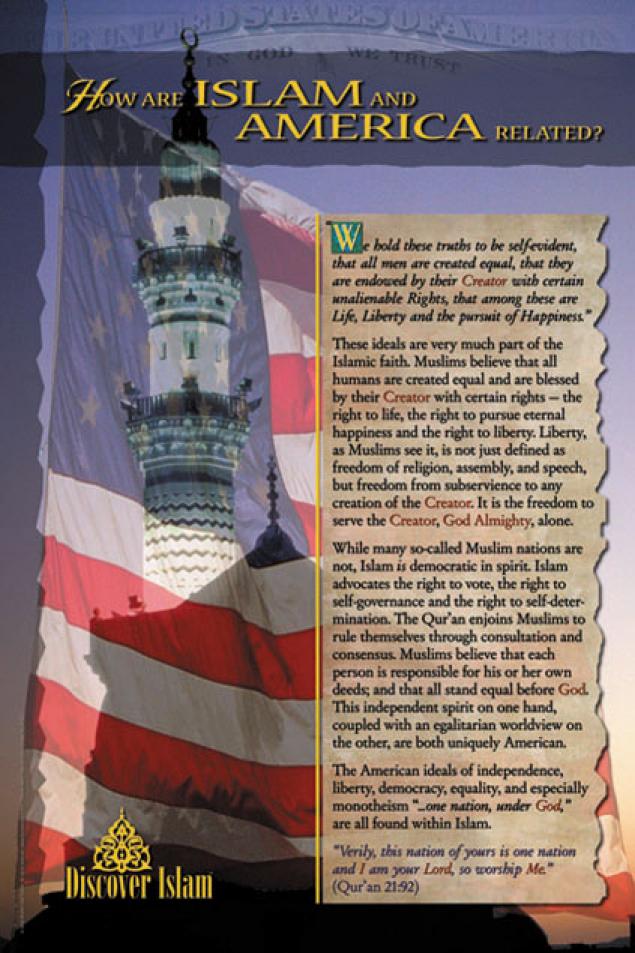 "We hold these truths to be self-evident, that all men are created equal, that they are endorsed by their Creator with certain unalienable Rights, that among these are Life, Liberty and the pursuit of Happiness." These ideals are very much part of the Islamic faith. Muslims believe that all humans are created equal and are blessed by their Creator with certain rights - the right to life, the right to pursue eternal happiness and the right to liberty. Liberty, as Muslims see it, is not just defined as freedom of religion, assembly, and speech, but freedom from subservience to any creation of the Creator. It is the freedom to serve the Creator, God Almighty, alone. While many so-called Muslim nations are not, Islam is democratic in spirit. Islam advocates the right to vote, he right to self-governance and the right to self-determination. The Qur'an enjoins Muslims to rule themselves through consultation and consensus. Muslims believe that each person is responsible for his or her own deeds; and that all stand equal before God. This independent sprit on one hand, coupled with an egalitarian worldview on the other, are both uniquely American. The American ideals of independence, liberty, democracy, equality, and especially monotheism "- one nation under God," are all found within Islam. Verily, this nation of yours is one nation and I am your Lord, so worship Me." (Qur'an 21:92)