Support & Feedback
Home > History > Islamic Posters > Is Islam respectful of other beliefs?
Back 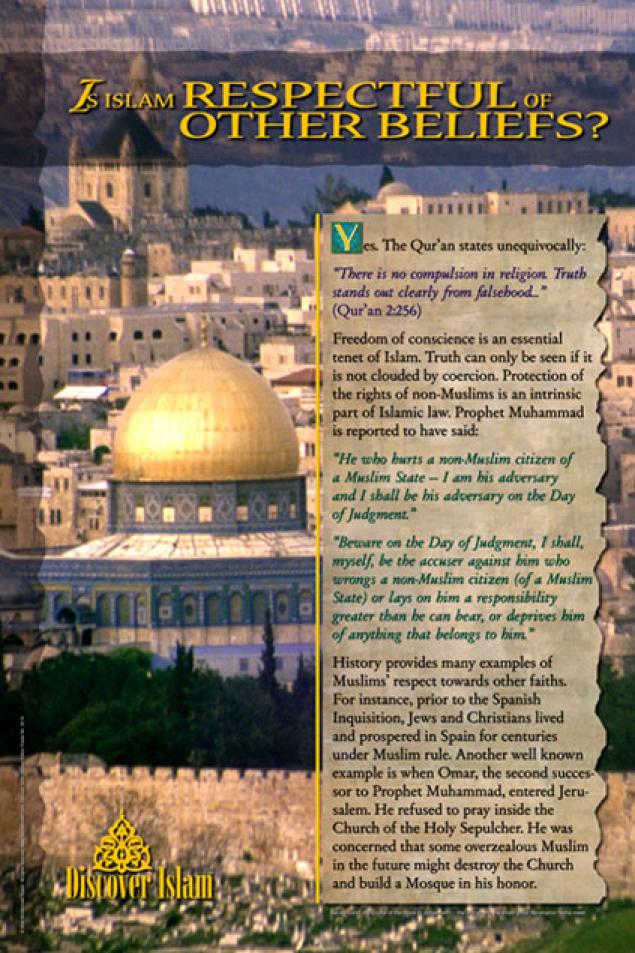 Yes. The Qur'an states unequivocally: "There is no compulsion in religion. Truth stands out clearly from falsehood......" (Qur'an 2:256) Freedom of conscience is an essential tenant of Islam. Truth can only be seen if it is not clouded by coercion. Protection of the rights of non-Muslims is an intrinsic part of Islamic law. The Prophet Muhammad is reported to have said: "He who hurts a non-Muslim citizen of a Muslim State - I am his adversary and I shall be his adversary on the Day of Judgment." "Beware on the Day of Judgment, I shall, myself, be the accuser against him who wrongs a non-Muslim citizen (of a Muslim State) or Lays on him a responsibility greater than he can bear, or deprives him of anything that belongs to him." History provides many examples of Muslims' respect towards other faiths. For instance, prior to the Spanish Inquisition, Jews and Christians lived and prospered in Spain for centuries under Muslim rule. Another well known example is when Omar, the second successor to Prophet Muhammad, entered Jerusalem. He refused to pray inside the Church of the Holy Sepulcher. He was concerned that some overzealous Muslim in the future might destroy the Church and build a Mosque in his honor.