Support & Feedback
Home > History > Islamic Posters > Who is ALLAH?
Back 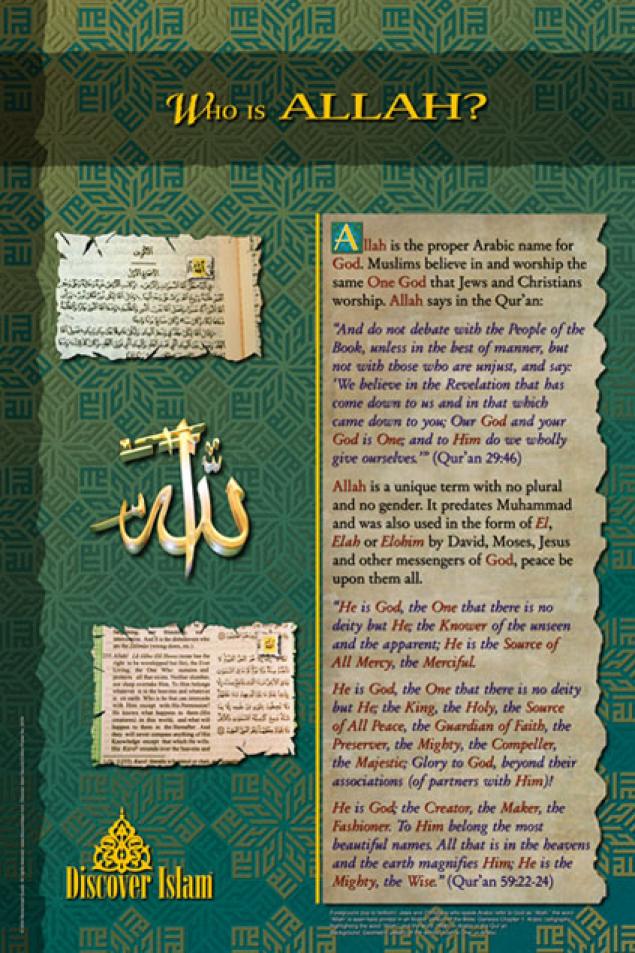 Allah is the proper Arabic name for God. Muslims believe in and worship the same One God that the Jews and Christians worship. Allah says in the Qur'an: "And do not debate with the People of the Book, unless in the best of manners, but not with those who are unjust, and say: "We believe in the Revelation that has come down to us and in that which has come down to you; Our God and your God is One, and to Him do we wholly give ourselves." (Qur'an 29:46) Allah is a unique term with no plural an no gender. It predates Muhammad and was also used in the form of El, Elah or Elohim by David, Moses, Jesus and other messengers of God, peace be upon them all. "He is God, the One that there is no deity but He; the Knower of the unseen and the apparent; He is the Source of All Mercy, the Merciful. He is God, the One that there is no deity but He; the King, the Holy, the Source of All Peace, the Guardian of Faith, the Preserver, the Mighty, the Compeller, the Majestic; Glory to God, beyond their associations (of partners with Him)! He is God, the Creator, the Maker, the Fashioner. To Him belong the most beautiful names. All that is in the heavens and the earth magnifies Him; He is the Mighty, the Wise." (Qur'an 59:22-24)