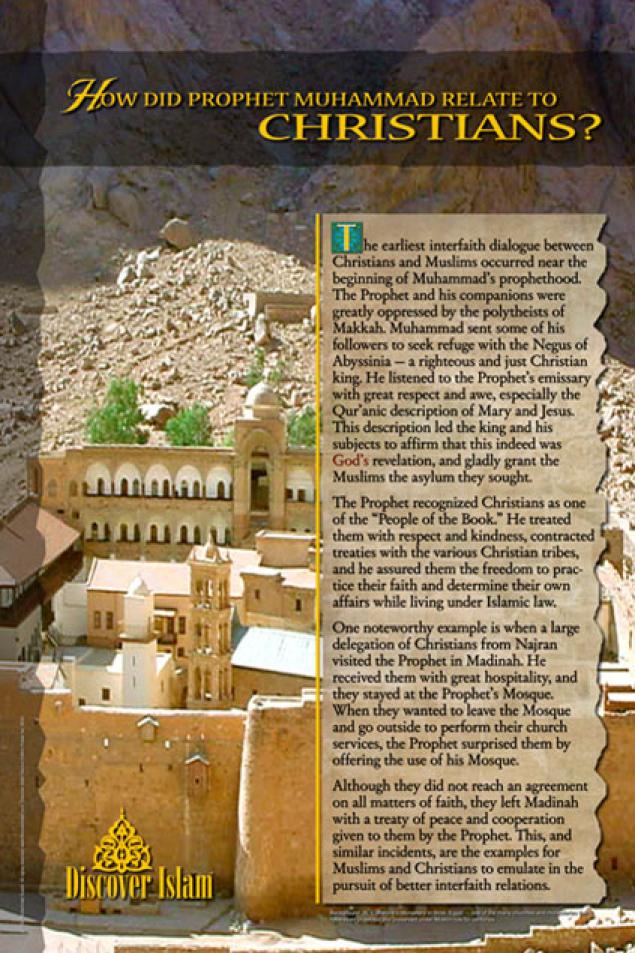 The earliest interfaith dialogue between Christians and Muslims occurred near the beginning of Muhammad's prophethood. The Prophet and his companions were greatly oppressed by the polytheists of Makkah. Muhammad sent some of his followers to seek refuge with the Negus of Abyssinia - a righteous and just Christian king. He listened to the Prophet's emissary with great respect and awe, especially the Qur'anic description of Mary and Jesus. This description led the king and his subjects to affirm that this indeed was God's revelation, and gladly grant the Muslims asylum they sought. The Prophet recognized Christians as one of the "People of the Book." He treated them with respect and kindness, contracted treaties with the various Christian tribes, and he assured them the freedom to practice their faith and determine their own affairs while living under Islamic law. One noteworthy example is when a large delegation of Christians from Najran visited the Prophet in Madinah. He received them with great hospitality, and they stayed at the Prophet's Mosque. When they wanted to leave the Mosque and go outside to perform their church services, the Prophet surprised them by offering the use of his Mosque. Although they did not reach an agreement on all matters of faith, they left Madinah with a treaty of peace and cooperation given to them by the Prophet. This, and similar incidents, are the examples for Muslims and Christians to emulate in the pursuit of better interfaith relations.