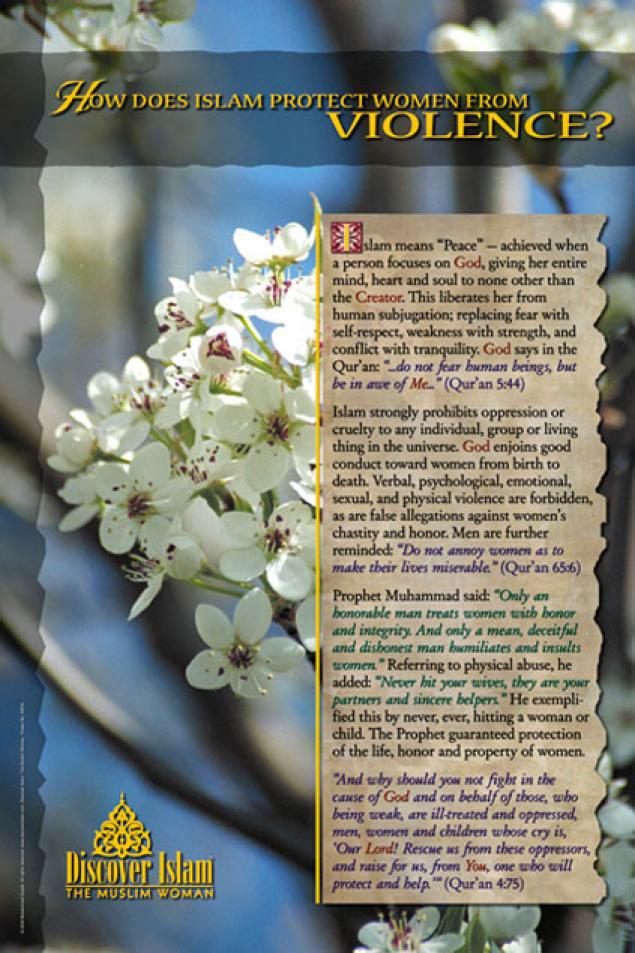 Islam means "Peace" - achieved when a person focuses on God, giving her entire mind, heart and soul to none other than the Creator. This liberates her from human subjection; replacing fear with self-respect; weakness with strength, and conflict with tranquility. God says in the Qur'an: "...do not fear human beings, but be in awe of Me." (Qur'an 5:44) Islam strongly prohibits oppression or cruelty to any individual, group or living thing in the universe. God enjoins good conduct toward women from birth to death. Verbal, psychological, emotional, sexual, and physical violence are forbidden, as are false allegations against women's chastity and honor. Men are further reminded: "Do not annoy women as to make their lives miserable." (Qur'an 65:6). Prophet Muhammad said: "Only an honorable man treat women with honor and integrity. And only a mean, deceitful and dishonest man humiliates and insults women." Referring to physical abuse, he added: "Never hit your wives, they are your partners and sincere helpers." He exemplified this by never, ever, hitting a women or child. The Prophet guaranteed protection of the life, honor, and property of women. "And why should you not fight in the cause of God and on behalf of those, who being weak, are ill-treated and oppressed, men, women and children whose cry is, 'Our Lord! Rescue us from these oppressors, and raise for us, from You, one who will protect and help.'" (Qur'an 4:75)