Support & Feedback
Home > History > Islamic Posters > Apart from the Quran is there any other Sacred Source?
Back 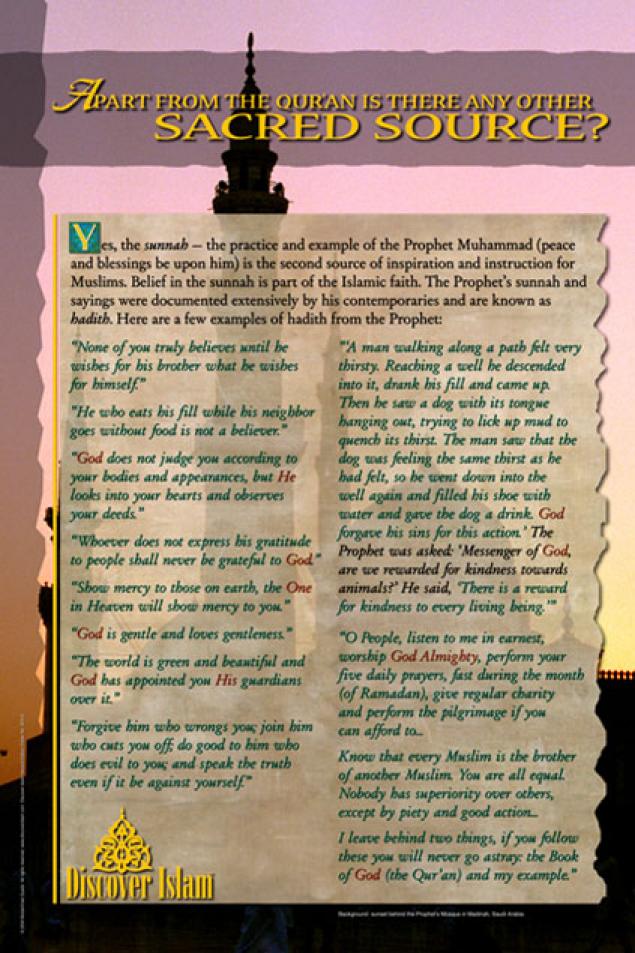 Yes, the sunnah - the practice and example of the Prophet Muhammad (peace and blessings be upon him) is the second source of inspiration and instruction for Muslims. Belief in the sunnah is part of the Islamic faith. The Prophet's sunnah and sayings were documented extensively by his contemporaries and are known as hadith. Here are a few examples of hadith from the Prophet: "None of you truly believe until he wishes for his brother what he wishes for himself." "He who eats his fill while his neighbor goes without food is not a believer." "God does not judge you according to your bodies and appearances, but He looks into your hearts and observes your deeds." "Whoever does not express his gratitude to people shall never grateful to God." "Show mercy to those on earth, the One in Heaven will show mercy to you." "God is gentle and loves gentleness." "The world is green and beautiful and God has appointed you His guardians over it." "Forgive him who wrongs you; join him who cuts you off; do good to him who does evil to you; and speak the truth even if it be against yourself." " 'A man walking along a path felt very thirsty. Reaching a well he descended into it, drank his fill and came up. Then he saw a dog with its tongue hanging out, trying to lick up mud to quench its thirst. The man saw that the dog was feeling the same thirst as he had felt, so he went down into the well again and filled his shoe with water and gave the dog a drink. God forgave his sins for this action.' The Prophet was asked: 'Messenger of God, are we rewarded for kindness towards animals?' He said, 'There is a reward for kindness to every living being.' " "O People, listen to me in earnest, worship God Almighty, perform your five daily prayers, fast during the month (of Ramadan), give regular charity and perform the pilgrimage if you can afford to... Know that every Muslim is the brother of another Muslim. You are equal. Nobody has superiority over others, except by piety and good actions... I leave behind two things, if you follow these you will never go astray: the Book of God (the Qur'an) and my example."