Support & Feedback
Home > History > Islamic Posters > How do Muslim view the elderly, death, and the afterlife?
Back 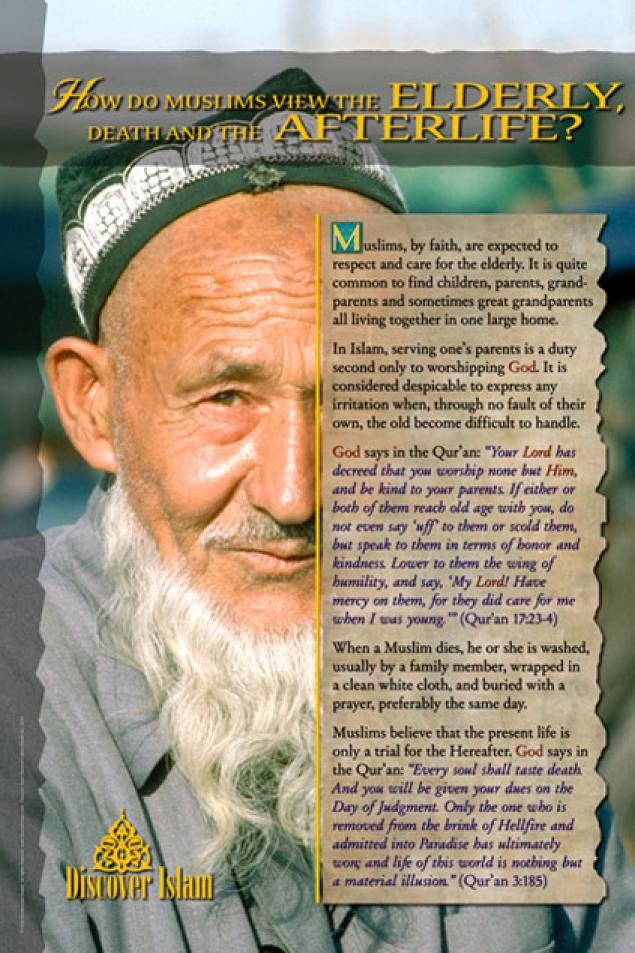 Muslims, by faith, are expected to respect and care of the elderly. It is quite common to find children, parents, grandparents and sometimes great grandparents all living together in one large home. In Islam, serving one's parents is a duty second only to worshipping God. It is considered despicable to express any irritation when, through no fault of their own, the old become difficult to handle. God says in the Qur'an: "Your Lord has decreed that you worship none but Him, and be kind to your parents. If either or both of them reach old age with you, do not even say 'uff' to them or scold them, but speak to them in terms of honor and kindness. Lower to them the wing of humility, and say, 'My Lord! Have mercy on them, for they did care for me when I was young.'" (Qur'an 17:23-4) When a Muslim dies, he or she is washed, usually be a family member, wrapped in a clean white cloth, and buried with a prayer, preferably the same day. Muslims believe that the present life is only a trial for the Hereafter. God says in the Qur'an: "Every soul shall taste death. And you will be given your dues on the Day of Judgment. Only the one who is removed from the brink of Hellfire and admitted into Paradise has ultimately won; and life of this world is nothing but a material illusion." (Qur'an 3:185)