Support & Feedback
Home > History > Islamic Posters > Who was Muhammad?
Back 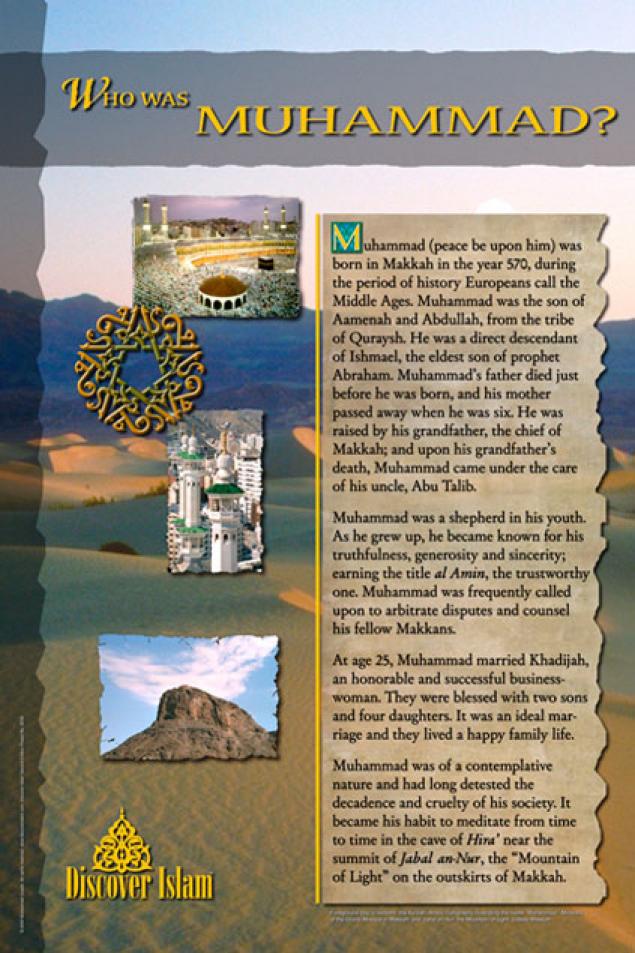 Muhammad (peace be upon him) was born in Makkah in the year 570, during the period of history Europeans called the Middle Ages. Muhammad was the son of Aamenah and Abdullah, from the tribe of Quraysh. He was a direct descendant of Ishmael, the eldest son of prophet Abraham. Muhammad's father died just before he was born, and his mother passed away when he was six. He was raised by this grandfather, the chief of Makkah; and upon his grandfather's death, Muhammad came under the care of his uncle, Abu Talib. Muhammad was a shepherd in his youth. As he grew up, he became known for his truthfulness, generosity, and sincerity; earning the title of al Amin, the trustworthy one. Muhammad was frequently called upon to arbitrate disputes and counsel his fellow Makkans. At age 25, Muhammad married Khadijah, an honorable and successful businesswoman. They were blessed with two sons and four daughters. It was an ideal marriage and they lived a happy family life. Muhammad was of a contemplative nature and had long detested the decadence and cruelty of his society. It became his habit to meditate from time to time in the cave of Hira' near the summit of Jabal an-Nur, the "Mountain of Light" on the outskirts of Makkah.