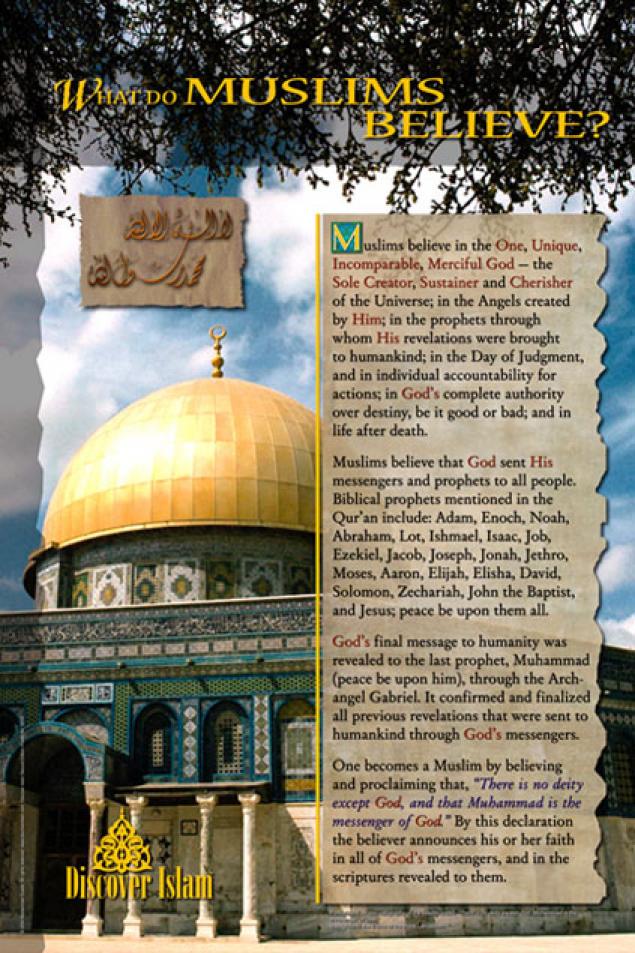 Muslims believe in the One, Unique, Incomparable, Merciful God - the Sole Creator, Sustainer and Cherisher of the Universe; in the Angels created by Him; in the prophets through whom His revelations were brought to humankind; in the Day of Judgment, and in individual accountability for actions; in God's complete authority over destiny, be it good or bad and in life after death. Muslims believe that God sent His messengers and prophets to all people. Biblical prophets mentioned in the Qur'an include: Adam, Enoch, Noah, Abraham, Lot, Ishmael, Isaac, Job, Ezekiel, Jacob, Joseph, Jonah, Jethro, Moses, Aaron, Elijah, Elisha, David, Solomon, Zechariah, John the Baptist, and Jesus; peace be upon them all. God's final message to humanity was revealed to the last prophet, Muhammad (peace be upon him), through the Archangel Gabriel. It confirmed and finalized all previous revelations that were sent to humankind through God's messengers. One becomes a Muslim by believing and proclaiming that, "There is no deity except God, and that Muhammad is the messenger of God." By this declaration the believer announces his or her faith in all of God's messengers, and in the scriptures revealed to them.