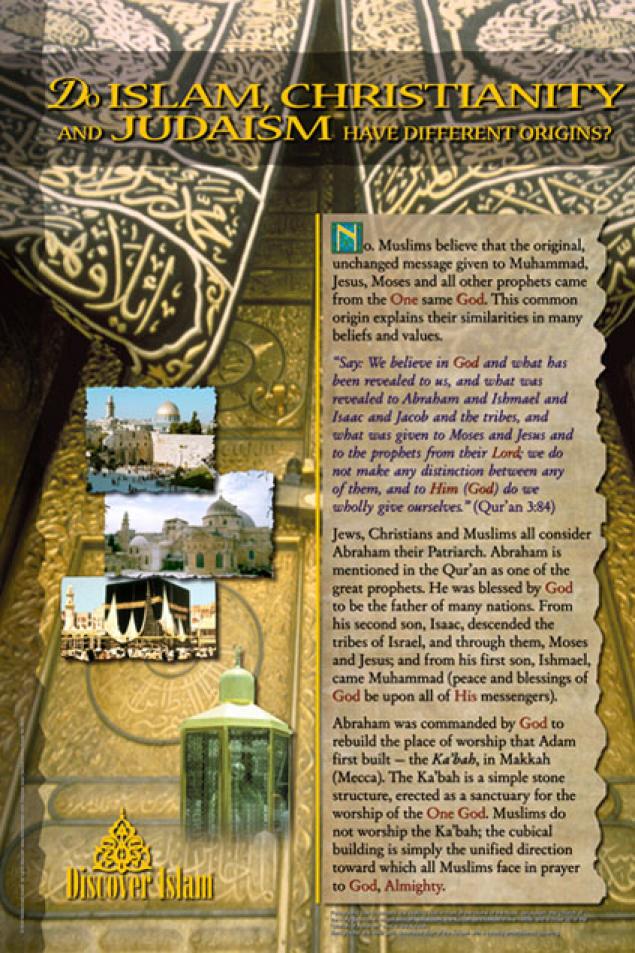 No. Muslims believe that the original, unchanged message given to Muhammad, Jesus, Moses and all other prophets came from the One same God. This common origin explains their similarities in many beliefs and values. "Say: We Believe in God and what has been revealed to us, and what was revealed to Abraham and Ishmael and Isaac and Jacob and the tribes, and what was given to Moses and Jesus and to the prophets from their Lord; we do not make any distinction between any of them, and to Him (God) do we wholly give ourselves." (Qur'an 3:84) Jews, Christians and Muslims all consider Abraham their Patriarch. Abraham is mentioned in the Qur'an as one of the great prophets. He was blessed by God to be the father of many nations. From his second son, Isaac, descended the tribes of Israel, and through them, Moses and Jesus; and from his first son, Ishmael, came Muhammad (peace and blessings of God be upon all of His messengers). Abraham was commanded by God to rebuild the place of worship that Adam first built - the Ka'bah, in Makkah (Mecca). The Ka'bah is a simple stone structure, erected as a sanctuary for the worship of the One God. Muslims do not worship the Ka'bah; the cubical building is simply the unified direction toward which all Muslims face in Prayer to God, Almighty.