Support & Feedback
Home > History > Islamic Posters > Why is the family so important to Muslims?
Back 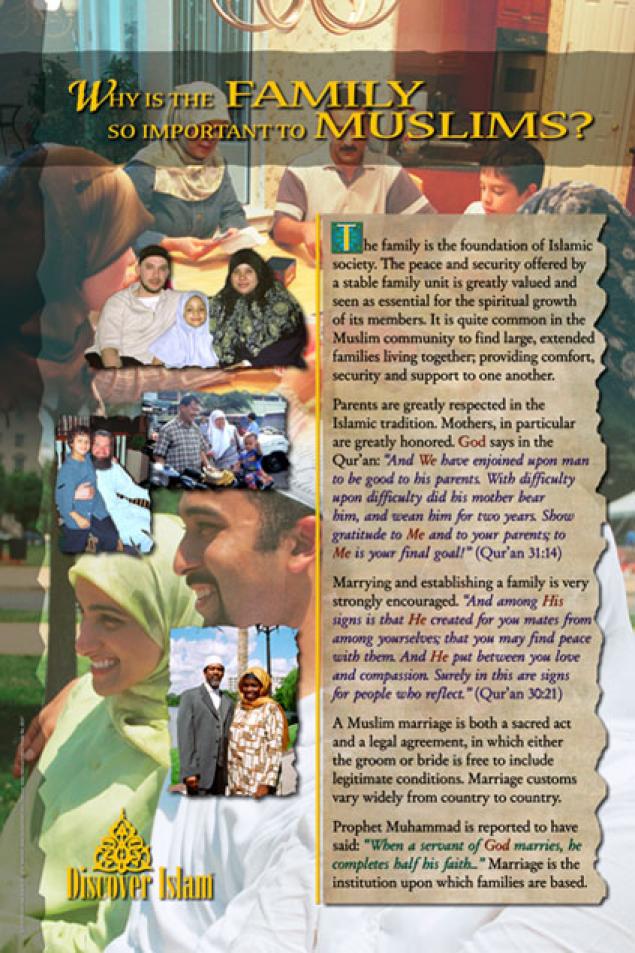 The family is the foundation of Islamic society. The peace and security offered by a stable family unit is greatly valued and seen as essential for the spiritual growth of its members. It is quite common in the Muslim community to find large, extended families living together; providing comfort, security and support to one another. Parents are greatly respected in the Islamic tradition. Mothers, in particular are greatly honored. God says in the Qur'an: "And we have enjoined upon man to be good to his parents. With difficulty upon difficultly did his mother bear him, and wean him for two years. Show gratitude to Me and to your parents; to Me is your final goal!" (Qur'an 31:14) Marrying and establishing a family is very strongly encouraged. "And among His signs is that He created for you mates from among yourselves; that you may find peace with them. And He put between you love and compassion. Surely in this are signs for people who reflect." (Qur'an 30:21) A Muslim marriage is both a sacred act and a legal agreement, in which either the groom or the bride is free to include legitimate conditions. Marriage customs vary widely from country to country. Prophet Muhammad is reported to have said: "When a servant of God marries, he completes half his faith." Marriage is the institution upon which families are based.